At the end of the American Civil war all the soldiers and slaves were free and most of them went looking for new employment.

Officially, the Civil War began on 12 April 1861 with the firing upon of Fort Sumter and ended 9 April, 1865 with the Surrender of General Robert E. Lee. Basically, it was a military conflict between the Union (The United States of America) and the 11 Secessionist states known as the Confederate States of America (The Confederacy). Though these "official" dates span four years, the conflict gradually evolved over a period of several decades.

The end of the war marked the end of 250 years of slavery in North America and the beginning of a new era of freedom for African Americans.

When the Civil War ended, many of the soldiers had no home to return to and started drifting to the West. The territories were open and untamed and many of these men only owned what they could carry on horseback. Ranchers hired these hard working men as ranch hands. The hands tended to the herd and did work around the ranch. When the time came to sell the beef, the hands would round-up the herd from the open prairie and drive the cattle miles to market.

The herding technique was originally brought over to the New World in the early 15th century by the Spanish and used by Americans who had to control large herds of cattle over a wide open space. The traditional cowboy look didn't come about until after the Mexican-American War in the 1850s. 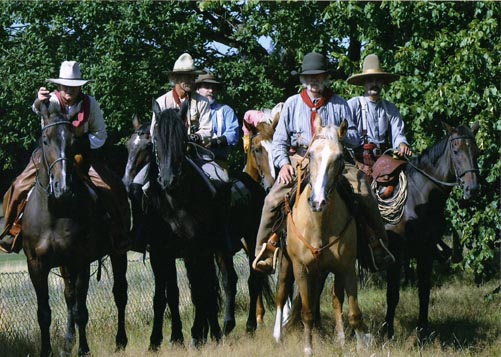 The word cowboy refers to the men who drove herds of cattle from ranch land in Texas over hundreds of miles of rough and dangerous terrain to the stockyards in the North, a trip taking two to three months. A typical crew consisted of one trail chief, eight cowboys, a wrangler to take care of the horses, and a cook. One historian estimates that an average crew would have included two or three black cowboys.

By around 1890 the cowboy's world had changed. Railroad lines had rendered long drives unnecessary, and barbed-wire fences now blocked the legendary Chisholm and Western trails. Some old cowboys, like Love, found work as Pullman porters. Others continued to work on ranches as broncobusters who tamed wild mustangs. Still others, like Bill Pickett, put their riding, roping, or shooting skills to use on the rodeo and vaudeville circuits.